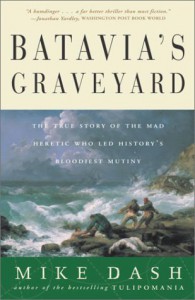 After reading this book, I think that under favorable circumstances, height of human cruelty could far surpass the physical height of Olympus Mons. Twice.

Batavia was a ship of the Dutch East India Company built in 1628 to procure spices from the East and as was the kind-of norm in the era, it was shipwrecked on her maiden voyage.

But what made this incident different from others was the horror that followed owing to the mutiny and massacre that took place amongst the survivors stranded on the reefs of Abrolhos Islands off the coast of Western Australia.

Batavia sailed under commandeur and upper-merchant Francisco Pelsaert and was captained by Ariaen Jacobsz. But the main villain of this tragedy was one frustrated under-merchant (working under upper-merchant Francisco Pelsaert), Jeronimus Cornelisz, who was a bankrupt apothecary (pharmacist) from the Netherlands who had left his wife behind forever in the Netherlands in order to escape from his creditors and find himself a comfortable life somewhere in the East, by any means. But what made Cornelisz truly dangerous was his mad belief in antinomianism: the theological doctrine that by faith and God's grace a Christian is freed from all laws (including the moral standards of the culture). Even murder. Or rape.

Mike Dash has provided detailed and interesting background information on all the major characters which mainly includes Francisco Pelsaert, Ariaen Jacobsz and Jeronimus Cornelisz. The book could be considered to be divided in two major parts. The shipwrecking is described in the first chapter and then Mike Dash delineates the chain of events that eventually led to Batavia's doom. The second half deals with the massacre committed by Cornelisz and his fellow mutineers on the islands and its aftermath.

So during the voyage, Jacobsz and Cornelisz (driven by his greed and beliefs) conceived a plan to take the ship by mutiny, which would allow them to start a new life as the ship contained lots of silver and moreover they also decided to get more rich by becoming pirates.

Jacobsz deliberately steered the ship off course, away from the rest of the fleet (There were more than half a dozen ships with the “Batavia”). The ship struck Morning Reef, part of the Abrolhos islands off the Western Australian coast. Of the 322 passengers aboard, 40 people drowned in the initial disaster. They were luckier than those who were to die on the islands. The survivors were transferred to nearby islands which contained no fresh water and only very limited food in form of birds and some sea-lions.

No rescue was coming as they were way off course, so Captain Jacobsz alongwith Francisco Pelsaert, senior officers, a few crewmembers, and some passengers left the wreck site in a longboat, and headed north to the city of Batavia (Jakarta). This journey, which they completed successfully, was a feat in itself.

But on the other hand, in the absence of his two superiors, Jeronimus Cornelisz was left in charge of the survivors. He was afraid that Pelsaert might discover his mutinous plans. Therefore, he made plans to hijack any rescue ship that might return and use the vessel to seek another safe haven.

With a dedicated band of murderous young men, he began to systematically (at first) kill anyone he believed would be a problem to his reign of terror, or a burden on their limited resources. The mutineers became intoxicated with killing, and no one could stop them which led to a splurge of random killings.

But Cornelisz had also left some soldiers on another island who were led by one Wiebbe Hayes, and to their good fortune, they had found abundant sources of water and food on the other island. With his own supply dwindling, Cornelisz decided to take over Hayes’ island (by killing everyone there, of course).

The events that ensued were nothing sort of dramatic, so I am not going to ruin it for anyone. But the naked truth is that that of the original 341 people on board the Batavia, only 68 made it safely to the port of Batavia (Jakarta).

So know this, although this book is well written, I am not recommending it for everyone as the second half is extremely graphic and gruesome. You will have to decide for yourself on this one.